This post is a continuation of my travel series “Beauties of Mumbai & Ahmedabad”.

I hope you’ve read my previous post, if not please find the link at the end of the post.

“Gateway of India” is one of the 5 magnificent gateways/doorways in India. It has always been in my must visit list. After spending early hours of that morning in covering Chowpatty beach and Haji-Ali-Dargah, next in list was Gateway of India. My DSLR was dead on charge by the time we reached there hence I couldn’t manage to click many photos on DSLR and tried capturing few on my Phone. Will try to take you through our experience with the pictures I have…

The structure was magnificent and lived up to its beautiful description. It is located on the waterfront and over looks Arabian Sea. Its architecture design is a combination of Hindu and Muslim architectural styles also referred known as Indo-Saracenic style. A beautiful view of Taj Mahal Palace and Tower Hotel opposite Gateway of India was an added bonus; it was radiating a charm of its own and the clear blue sky as a back drop was complimenting it well.

We had fun taking selfies and experimenting with shadows. I guess the photos below sums it up. 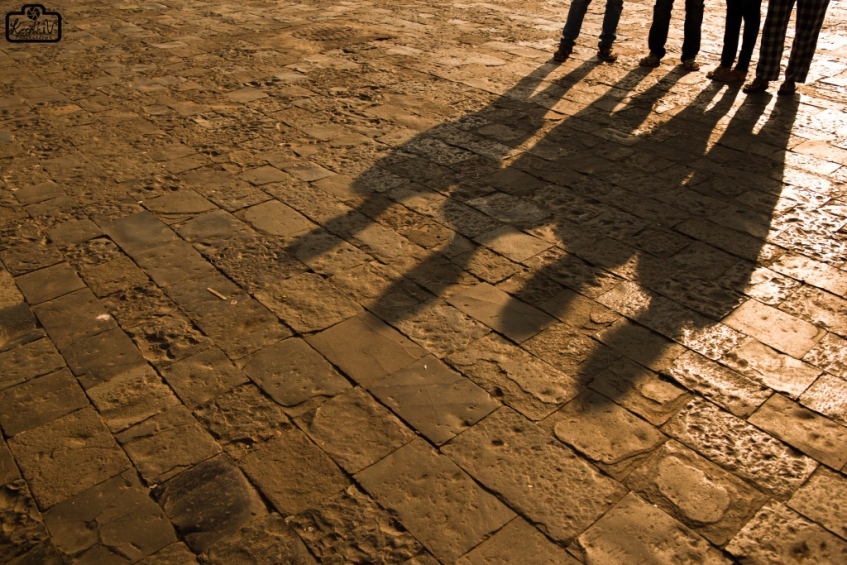 We strolled around a bit and explored lanes near Gateway of India. There were many shopping outlets, few were open by then but most of them were closed or being opened just then. Also we did not have time for shopping, so we moved ahead. The streets were clean and the building’s represented old architecture, which is my personal favorite.

Personally, I enjoyed my walk through those empty lanes. 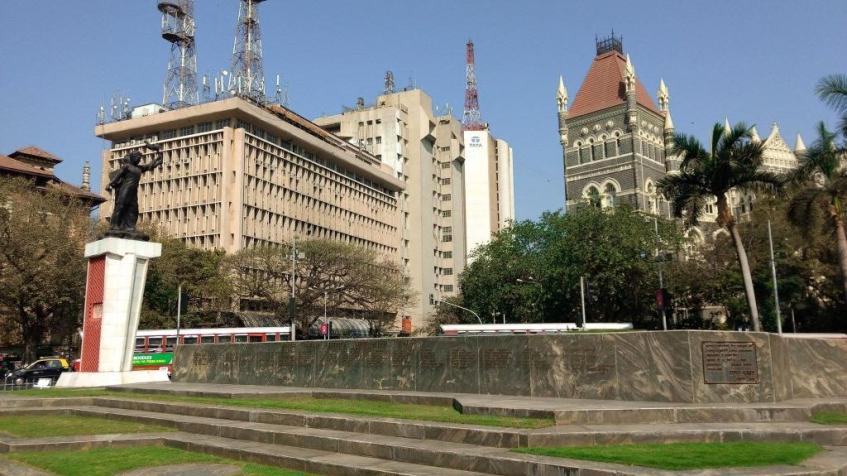 It was a sunny day and in a hurry to cover as many places a we can, we ended up roaming around without having breakfast since morning.  Exhausted, we decided to head back and on the way unable to resist my hunger, I grabbed a quick bite of bread pakoda; it was yummy!

As it was only a 4 hour package and by then was almost end of it, so, we asked the driver to take us back. He dropped us at Mumbai central railway station. We had only an hour or two to freshen up and have lunch before we board our train to Ahmedabad.

Surprisingly the waiting halls at MC were comparatively neat! We quickly freshened up and headed to a udipi hotel near the station to have a filling meal before we took off from Mumbai. We ordered coffee and rawa dosa; even had caramel pudding for dessert, which was mouth-watering. I can still feel the taste of it as I write, such was the delicacy.

Once done with lunch, we rushed back to the station and waited for the train… 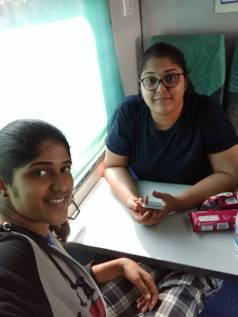 Train journey to Ahmedabad was rather interesting…! It also happens to be the first chair car Coach we ever boarded…Well Yes! I admit that we were excited as if it was our first train journey!

The train was on tracks of Mumbai central on time. We boarded the train and occupied our seats. Deepthi was very keen on being seated at window side and luckily the seat numbers confirmed on our name were window side seats. I must say, as we sat there, we were over joyed like kids.

All the excitement vanished in next few hours though! The first 4 hours of our 6 hr. long journey was fun, we even witnessed some beautiful views outside, discussed about our first train journey which we had when we were kids and some random stuff like my next photo-shoot (Which I took up before commencing our journey), it was due in next few weeks, which is as soon as we return and also talked about the places we ought to cover and made plans for that while sipping amazing cappuccino which was being sold on train (We ended up having 3 cups of coffee each!)….As time passed our smooth journey turned into rather painful one. Did I forget to mention that the seats were not comfortable especially they were not made for tall personalities like us!  We ended up having body pains by the time we got off at Ahmedabad.

After this experience, I do not suggest a chair car coach when journey time is more than 3 hours long! It’s a strict NO NO from me!

Time passed as if seconds were minutes and minutes were hours; we waited badly for Ahmedabad to arrive!

Our next stop was Ahmedabad. I will cover our experiences there soon enough in my next post…!

You can read the previous posts here:

I am taking my Alexa Rank to the next level with #MyFriendAlexa via Blogchatter, #KheerWrites

I have come a long way from being an electronic engineer, former QA analyst, Travel Enthusiast to passionate Photographer, Food Addict and die hard Soccer Fan! How can I forget about books? I am also an Avid Reader, so much so that one can call me a Book Worm! To put it in a single phrase; I am a pinch of everything!

This site uses Akismet to reduce spam. Learn how your comment data is processed.